Journey to the origins

A geographical and spiritual journey to Mbanza-Kongo -old capital of the Kingdom of Kongo and now a small town in northern Angola-, by the American composer, musician, producer and writer Ned Sublette, was the essence for the production of four interesting radio programs transmitted by the station WNYE 91.5 FM -New York, september-november 2012. As his producer and director expressed, was a journey through the history of music. You can find links to all four programs, to the researchers, musicologists and musicians involved, as well as to the biography of the leading specialists of this unusual program. I leave you with the company of Ned Sublette, who is in search of the african musical origins of our continent: America.

HDA 1. MUSIC AND NATION IN LUANDA


Explores the role music played in the creation of a uniquely Angolan consciousness as the country struggled toward independence in the 1960s and ‘70s after centuries of colonialism. Our guide will be Dr. Marissa Moorman,  historian of southern Africa and author of Intonations: A Social History of Music in Luanda, Angola from 1945 to Recent Times. On the ground in Angola, producer Ned Sublette talks to critic and musicologist Jomo Fortunato, and to guitarist and bandleader Carlos Vieira Dias. We’ll hear the pathbreaking Ngola Ritmos, who dared sing songs in Kimbundu publicly when it was prohibited by the Portuguese. And we’ll hear the voices of Teta Lando, Urbano de Castro, Artur Nunes, and Luis Vizconde, from the age when the guitar-driven style called semba ruled, as well as some snazzy ‘60s guitar instrumentals. We’ll also check in on the new generation of semba, via Paulo Flores and Yuri Da Cunha.

HDA 2. 21st CENTURY URBAN ANGOLA: KIZOMBA, KUDURO, AFRO-HOUSE AND BEYOND
Takes us to the street in Angola’s dense, smoggy, oil-booming capital city of Luanda. Peace came to Angola in 2002 after forty-two years of war, and now everything is different.
The postwar generation of the last ten years communicates via text-messaging and electronic music. Producer Ned Sublette checks out
kuduro(literally, hard-ass) –the high-energy electronic dance music that dominates Luanda today, as well as the the zouk-like couple dance of kizomba, a phenomenon that began in the 80s and still packs in dancers to Luanda clubs, and, farther underground, the computer-driven style called Afro-House.

HDA 3. A SPIRITUAL JOURNEY TO MBANZA-KONGO
Today Mbanza-Kongo (Kongo City) is part of Angola, in the north where the Congo River divides Angola from the Democratic Republic of Congo. When the first missionaries arrived there in 1491, it was the seat from which the Manikongo (king) ruled over a large area that reached to south of Luanda. It was a city of luxury, with perhaps as many as 60,000 people at its peak. To make this unprecedented program, producer Ned Sublette traveled to Mbanza-Kongo to rendezvous with Dr. Bárbaro Martínez Ruiz, professor of art and art history at Stanford.
We’ll learn about the simbi, the spirits that Martínez Ruiz describes as “the multiple power of god”; hear Antonio Madiata play the lungoyi-ngoyi, the two-stringed viola of the Kongo court; attend a session of the lumbu, the traditional tribunal of elders; listen to the voice of a deceased singer who took 500 years of genealogical knowledge with him when he departed; talk to traditional healer Pedro Lópes; and with the help of historian C. Daniel Dawson and with Angolan composer and musicologist Victor Gama, we’ll examine Kongo-Ngola culture in the diaspora –in Brasil, Haiti, Cuba, and more.

HDA 4. THE CUBAN INTERVENTION IN ANGOLA
The twenty-seven-year-long Angolan civil war was also an international crossroads of the Cold War, involving Cuba, the Soviet Union, Zaire, South Africa, and the United States. When it was over, Namibia was independent, apartheid had fallen, Angola was a nation, and the Soviet Union had ceased to exist. Through music, interviews, and historical radio clips, this program will tell the story of Cuba’s massive commitment in Africa, tracing an arc from 1959 to 1991.
We’ll talk to Piero Gleijeses, foreign policy specialist at Johns Hopkins University and author of Conflicting Missions: Havana, Washington, and Africa 1959-1976, and to Dr. Marissa Moorman, author of the forthcoming Tuning in to Nation: Radio, State Power, and the Cold War in Angola, 1933-2002, who will share with us rare archival recordings of radio broadcasts featuring the voices of Agostinho Neto, Jonas Savimbi, and others. We’ll talk to cuban composer Tony Pinelli, who traveled in a brigada artística playing music for Cuban soldiers and for Angolans. And from Cuba, Angola, Zaire, and Portugal, we’ll hear some of the music that accompanied the struggle.


HIP DEEP ANGOLA was produced with support from the National Endowment for the Humanities. A SPIRITUAL JOURNEY TO MBANZA-KONGO was supported by a 2012 Knight Luce Fellowship for Reporting on Global Religion. The fellowship is a program of the University of Southern California's Knight Chair in Media and Religion. 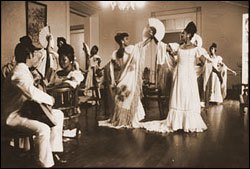